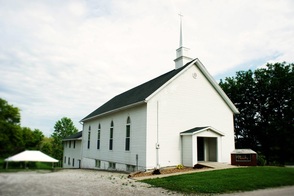 The town of Ridgely, as plotted now, was formed in 1839. Ridgely Christian Church was organized on June 16, 1867. The building in which the congregation first worshipped, was purchased for $425.00.

As the congregation grew, plans for a new building began. The people of the church collected donations and built the church building that is still in use today. The cost of the new building was $2,000.00. The furnishings totaled $85.00. The building was completed in 1885 and worship in it began.

Through the years many families have enjoyed the Christian fellowship of  Ridgely Christian Church. The building stands much like it did when it was first built, except for the addition of the basement and the Sunday School classrooms.  The lower level was hand dug and crafted in the 1940’s. Although the building is 130+ years old, it continues to stand erect, displaying the love and care of all of the people who have passed through its doors and who continue to call it their church home today.
BACK TO TOP